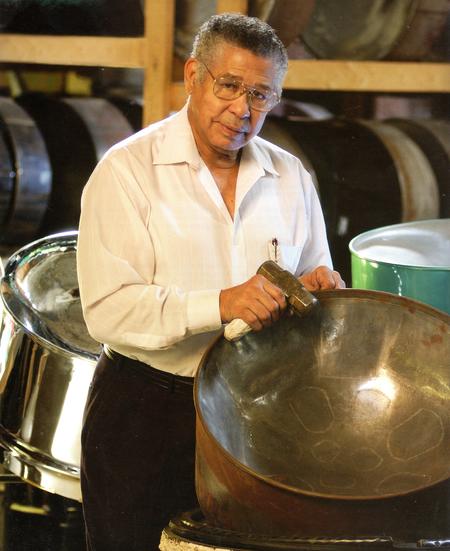 Ellie was born in Trinidad in 1927 and is widely regarded as the “Father of the Modern Steel Drum”- the instrument that he dedicated his life to developing and elevating. As a child in Trinidad, the steel pan art form had not yet been born. In his youth, Ellie had a vision of a musical instrument that could grow from the most humble origins - from discarded metal cans into tonal symphonic instruments. He pursued this vision with a rare single-mindedness, and achieved it through trial and error and invention and experimentation and epiphany. He was a powerful force and an integral part of the evolution of this musical steel drum - not just celebrated as an innovator, but renowned for his exceptional craftsmanship, the brilliance of his designs, and his unparalleled quality of sound.

Ellie emigrated to the US in 1967, and began traveling across America, building steelbands for schools and communities nationwide. In 1991, he was invited to move to Morgantown to join the WVU World Music Center. Since then, he has primarily focused on teaching apprentices the art of crafting and tuning steel drums full- time. As a teacher and mentor, he demanded and expected greatness of his students, and instilled in them a passionate pursuit of excellence. He officially stepped down from WVU in 2007, but he never retired his hammers.

Ellie was a piece of living history, and his stories captivated everyone in earshot. He could paint a picture with words, and his gift for storytelling and incredible memory would mesmerize an audience, whether in a lecture hall or in his living room. His legendary journey spanned decades, and thousands of steelbands around the globe now carry forward his story.
Ellie was grateful to have been widely celebrated for his work and his vision during his lifetime, and he received countless awards and accolades. He was especially proud to have received the National Heritage Fellowship Award from the NEA in 1999, the Chaconia Medal from Trinidad in 2000, for being inducted into the Percussive Arts Society Hall of Fame in 2003, and for having his work showcased at the Smithsonian Institution.

​     Dr. Ellie Mannette passed away peacefully at 10:50 am on Wednesday, August 29, 2018, in Morgantown, West Virginia. He was 90 years old. He is survived by a large and loving family, a tight-knit extended family of dedicated apprentices, and an incalculable number of people worldwide whose lives he touched.  Ellie was well-loved worldwide. His infectious laugh was irrepressible. He loved to play music and write songs, and he dedicated many compositions to special people in his life. He enjoyed being around young people and inspiring them to embrace their passions as he did. His legacy will live on through the art form that he pioneered as well as through the students and musicians he inspired along his way. We are proud to have known him, we celebrate his life, we are heartbroken at his passing. Ellie was an extraordinary man.