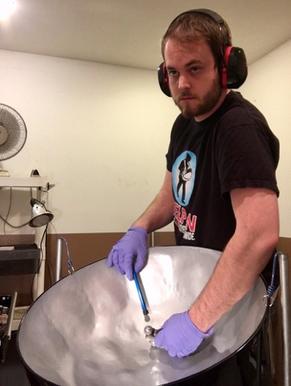 ​Cody Lyles, a Bowling Green, Kentucky native, has been studying the percussive arts since he was in the seventh grade. It was under the direction of Dr. Kip Crowder where he began his musical instruction in concert and marching percussion. Here, he was given the opportunity to perform at Carnegie Hall and many other music festivals across the nation. In 2010, Cody was given the opportunity to participate in the Stephen Collins Foster Music camp where he was first exposed to steel drums by Dr. Jason Koontz. This sparked his interest in world percussion and led him to studying music industry at Eastern Kentucky University. The opportunities proposed by Dr. Koontz were limitless, and it was during his college career that he got to participate in events such as PANfest in Virginia Beach, traveling to Trinidad to compete in Panorama, and also traveling to St. Lucia to play in a Caribbean and Brazilian workshop that was led by Dr. Koontz along with Andy Narell. In 2016, Cody attended the Ellie Mannette Festival of Steel as a staff member and has continued to do so ever since. In the spring of 2018, Cody moved from Kentucky to Morgantown because of an amazing opportunity to apprentice at Mannette Musical Instruments. Today, he continues his musical journey as a shop apprentice under the direction of the Ellie Mannette staff. 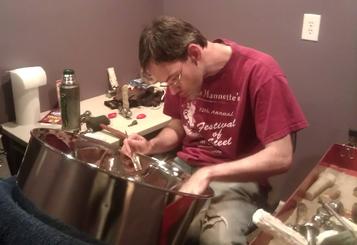 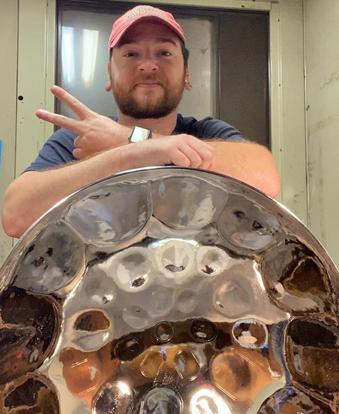 Ryan Roberts has been studying and perfecting his craft of the steel pan art form for over 18 years. A native to Virginia Beach, VA, He has performed at many events nationwide, including competing in the New York National Panorama Competition, The Virginia International Pan Fest, and the Dr. Ellie Mannette's Festival of Steel. Ryan was involved with 2 prestigious steel orchestras in Virginia Beach, VA. During his time in Mosaic Steel Orchestra and  The Rhythm Project, Ryan was given chance to perform with them throughout the United States.  In 2013, Ryan was given a once in a lifetime opportunity of apprenticing under Dr. Ellie Mannette.  Today, Ryan is a builder and tuner for Mannette Musical Instruments.

Rob Davis comes from a musical family of instrumentalists, vocalists, and music educators. He was a student at West Virginia University when Ellie began his long association there in the early 1990's, and was among Ellie's first apprentices at WVU. His teachers included Phil Faini, then head of WVU's percussion department, and later Dean of the College of Creative Arts, who was largely responsible for bringing Ellie to the University. He later taught private lessons for several years to young percussionists from pre-teen to college age.

He has performed as a classical percussionist with chamber symphonies and touring wind bands; as a steel drum player and as a marimbist in duos and small touring groups; and regularly as a drum set player in musical theater productions. His chief responsibility at Mannette Musical Instruments consists of tuning of Professional Series instruments as well as oversee all Classical Series instruments. In addition, he has traveled extensively to attend festivals and perform on-site tunings of whole steel bands and individual drums. These travels have taken him to all corners of the United States, as well as Canada, Mexico, and England.

Chanler Bailey has been involved with the percussive arts since a very young age. Much of his early career was devoted to marching percussion and culminated with 4 years marching in the Star of Indiana Drum & Bugle Corps and West Virginia University drumlines. He taught numerous marching programs including 3 years at WVU. While studying Percussion Performance at WVU, Chanler became interested in world percussion, focusing on African drumming and Steel Drums. He began to learn the art of making steel drums in 1992 with world-renowned steel drum maker Dr. Elliott Mannette. He has been working with Ellie since that time learning to build, tune and service the instruments. In 2007, Chanler created CB Studios, a private steel drum instruction studio, where he teaches steel bands and performs. Chanler is currently building and tuning steel drums  at Mannette Musical Instruments, teaching at his studio, and travels as a clinician and performer. 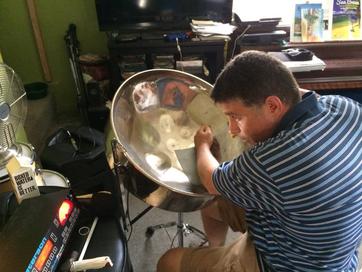 Keith was an apprentice to Dr. Ellie Mannette, father of the modern day steel drum, and is a Builder/Tuner at Mannette Musical Instruments. A native of Portsmouth, Virginia, Keith’s instruction in steel band performance began in middle school as a member of the Rhythm Project, a community outreach program focused in musical expression through steel drums and African drum and dance. While with the Rhythm Project, Keith has performed at various events including school functions, conferences, and political events. The group was also invited to Canada to be a part of Nova Scotia’s International Drum Tattoo. Keith received a Bachelor of Arts degree in music from West Virginia University and performed at (PASIC) as part of WVU’s Steel Drum Ensemble. From 2005 to 2008 he was instructor of the West Virginia University Community Steel Drum Ensemble. And in February 2013 Keith was invited by Andy Narell to perform in Trinidad during Panorama. Keith has been a member of Azaguno since 2005 and has had the opportunity to perform with the group internationally. Performances include the “Dance Immersion Showcase” in Toronto, Canada and as part of Ju Percussion Group’s “International Percussion Conference” in Taiwan. 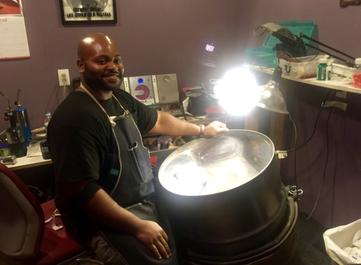